Special Prayer For Peace In Sudan

Posted on June 8, 2011 Categories: General No comments yet

The article below was published in Foreign Policy and written by Rebecca Hamilton. It shows the desperate situation in Sudan as we approach the July 9th date when South Sudan will become a separate nation. The election held last year was only in the South and the vote was for separation from the north. The middle area “Abyei” was to have had similar elections but the political differences and disputes were too great and the election was never held in Abyei. So it has remained a disputed area and a flash point as the day for the official creation of the new nation of South Sudan approaches. The church needs very much to pray concerning this issue both for Abyei and also for the successful creation of the South Sudanese nation. It is also important to pray for the unity of the people of South Sudan that they can overcome their own internal differences and become a united and strong nation. The people of Sudan have suffered so much over the past decades, it is a critical time for prayer. Please join with us in seeking the Lord concerning this important matter. 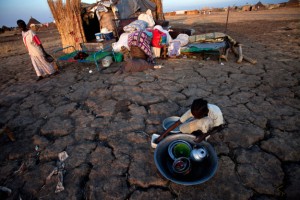 SOUTH OF ABYEI, Sudan—”I heard a plane way up high and then ‘Doom!’,
the sound of a bomb hitting the ground,” explained Mary Ajiang Kur,
37. “My neighbor called out: ‘The Arabs are coming!'” recalled Kur,
who said she grabbed her children and hid in the bushes.

Soon after, men arrived in her village, outside of Abyei town, the
heart of a fertile, 4,000-square-mile area that straddles the
provisional border between north and south Sudan.

“They came first on motorbikes and then [Toyota] Landcruisers with
guns mounted on them,” said Kur. She remembers many of the men were
wearing uniforms but said some were wearing civilian clothes. “They
started firing towards us. Bullets were landing beside us. We saw
people being killed.”

Now, Abyei town is eerily quiet. An occasional round of gunfire and
the whirr of a United Nations helicopter are the only sounds in a town
that is usually populated by around 40,000 people. On the weekend of
May 21, according to a U.N. report, the civilian population fled when
northern Sudanese troops assaulted the town with heavy weapons,
including airplanes and tanks. Khartoum’s forces now control the town,
although there is still a significant contingent of U.N. peacekeepers
stationed there. No reliable estimate of the number of killed and
wounded has been produced.

As seen from the air on Sunday, May 29, smoke rose from the remnants
of several dwellings. Buildings made of concrete seemed to be largely
intact. But the charred foundations of many tukuls, the grass-topped,
mudbrick homes that most Abyei residents inhabit, were clearly
visible. Among the smoldering remains, blackened bed frames and chairs
could be seen. Clothes and other household belongings were strewn
outside several homes.

On the main road in the center of town, a handful of men in army
uniforms appeared to be organizing the movement of household goods
onto a pale mustard-colored pickup truck. Others in civilian clothing
were seen carrying goods from houses into large piles on the side of
the road. The U.N. reported widespread burning and looting in the days
after the attack.

Both the Sudanese government, based in the mainly Arab and Muslim
north, and the South Sudan government, based in the largely Christian
and animist south, claim ownership over Abyei, a fertile borderland. A
2005 peace deal that ended decades of civil war between north and
south failed to reach a final agreement on its status. The region may
not be as economically important as it once was: At the time of the
2005 deal, Abyei accounted for one-quarter of Sudan’s total oil
production; since then, a court ruling has placed the most lucrative
fields outside of Abyei’s boundaries, and its one remaining oil field
is in decline.

The region, however, has acquired a symbolic value that has made
negotiations over the area particularly challenging. “Abyei has
unfortunately assumed a political character and complexity far removed
from the fundamental dispute on the ground,” says Zach Vertin, Sudan
analyst at the International Crisis Group.

In lieu of an agreement over the region’s status, the people of Abyei
were supposed to decide for themselves in a referendum in January. It
never took place. The South Sudan government argued that only the Ngok
Dinka, a settled, non-Arab group who are ethnically and politically
southern, should get to vote. Khartoum wanted the Misseriya, a nomadic
Arab group who travel through the Abyei region to graze their cattle
in the dry season, to also vote, believing that this would secure
Abyei for the north. The dispute was being addressed through political
negotiations until the north seized Abyei outright, sending thousands
of Ngok Dinka fleeing south in terror.

Many of those displaced described a pattern of invasion: after aerial
bombardment, armed men advanced in pairs on motorbikes, “one was
driving, the other was shooting,” followed by larger groups in
Landcruisers.

Some of the displaced said they were fired at from the air as they
tried to flee. “There were planes shooting at us,” said Nyek Atar, 17.
Others expressed guilt that they had to leave behind those who were
too old to run. All said that they left with nothing but the clothes
they were wearing.

Those who hid within Abyei town report seeing tanks rolling into the
center on Saturday, May 21. One woman says she saw a tank drive over
the bodies of three young men she knew who had been shot earlier by
troops in a Landcruiser.

Many who fled say that after realizing they were under attack and
running for some distance, they hid in the bushes until it was dark.
What followed were days on the move. Aid workers stationed in the
neighboring town of Agok, about 20 miles southwest of Abyei, say that
this was where many thousands first congregated. But on May 22, rumors
circulated that northern troops were going to advance on Agok. The
displaced took off again, heading further south.

In the panic to escape, many became separated from their families.

In Turalei, one of the main collecting points in South Sudan, people
are desperately seeking news of missing relatives. Aluel Nyoul, who is
unsure of her age but looks to be about 10, clung tightly to the hand
of her cousin. “I started running with my parents, but we lost each
other on the way,” said Nyuol. “I don’t know where they are. I don’t
know where anyone is. Just my cousin here.”

Many sustained injuries as they ran. Mothers tell of how difficult it
was for their young children on a journey of up to five days with no
food or water. Sunday Taban Lobaya, interviewed in the South Sudan
town of Wau, said her two-year-old son died of dehydration on the way.
“I had to just bury him and keep going with my other children,” said
Lobaya, who is seven months pregnant.

At first glance, it all sounds and looks awfully reminiscent of
Darfur, the western region where the Sudanese government and its
allied janjaweed militia committed atrocities against non-Arab
residents that the U.S. government in 2004 said were tantamount to
genocide. One should be cautious about rushing to draw the Darfur
analogy, however. The testimony of the (admittedly moderate) sample of
Abyei’s displaced population I have spoken with in recent days
suggests there may be important differences between the two
situations.

None of the Ngok Dinka people I interviewed reported being subjected
to any of the racial slurs that characterized the janjaweed attacks on
people in Darfur. To my knowledge, no sexual violence has yet been
reported, although this certainly does not mean there was none. And
death from direct violence does not seem to be a primary feature in
the eyewitness accounts to date, though this may be only because so
many people I met with started to run the moment they heard bombs
falling in the distance.

Despite many years of violent tension with the Misseriya, the
involvement of Misseriya militia in the attacks, and the general sense
that “the Arabs” did this, many displaced seem to be clear that the
primary culprit is the Sudanese government.

“The Misseriya do not have Antonovs” one woman told me, referring to
the planes used in the initial assault. The same message was echoed by
South Sudanese politician and Abyei native Luka Biong. “It was good
that it was not the Misseriya who launched the attack on Abyei. It was
clearly the NCP [Sudan’s ruling party]. It shows the Misseriya have
just been used by them.”

This is the second time the people of Abyei have been forced to run
for their lives in just three years. In 2008, Abyei was razed by the
Sudanese government and its allied militia. The violence followed a
dispute between northern and southern soldiers stationed in the town
under a joint administration set up by the 2005 peace agreement.

“In 2008 everything was burnt and destroyed,” explained Aker Chol
Deng, 20, who was displaced again by the recent violence. Deng says
that her family had just finished rebuilding their home this year.
Asked if she would return to Abyei again, Deng answered quickly, and
with some frustration at the question. “It is home.” Then, placing her
hand on the leg she injured as she ran, she added, “But only if it is
safe.”